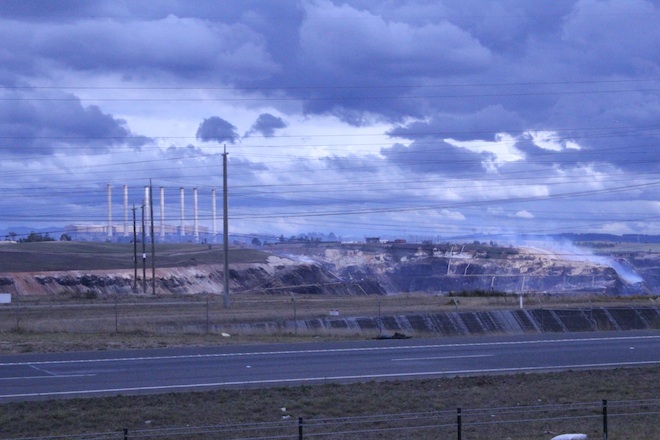 Back in February one of the coal mines in Morwell caught fire. The entire town was covered in ash. Residents were told to evacuate, the council was giving out masks while the rest of the state worried that they would lose power.

Now, the fires are under control but its left the local community in a bit of a state and its time for the cleanup to begin.

This week, we talk to the residents of Morwell about the aftermath of the open cut mine fire.

The mine fire is all south of the train tracks that run through Morwell but the bushfire that sparked the disaster began just north of the tracks on Toners Lane near Steve Szabo’s Golf Driving range.

Deb Hollis is a mother and a carer for her autistic son. She talks to Sally Whyte about the ways the ash and smoke from the fire effected her family.

Simon Ellis watched the fires start from his veranda. He shows Sally where they came in, and tells her about the effect the fire has had on his life and family.

We travelled to  Morwell was the day the EPA said that the air quality was safe for residents to return. A lot of Morwell, especially south of the railway tracks, have relocated to neighbouring towns, or Melbourne. Councillor Christine Sindt was one of the many residents who evacuated South Morwell.

Friends of the Garden

Morwell might be covered in ash and smell like smoke, but it is still full of roses. On the roundabouts, in people’s front yards and in the town’s rose garden. Del Matthews, Elizabeth Stewart and Karen Cooper tell Michael that the mine fire may have had an unintended beneficiary.

Music credit: Clinging To The Almost by Bell Garden Orchestra