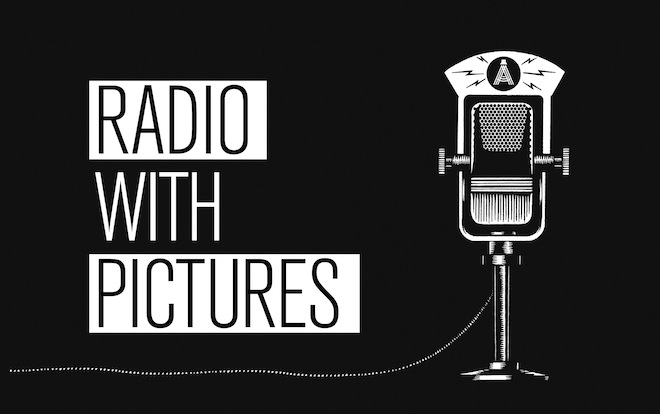 As devout believers in the age-old craft of storytelling, Graphic and FBi Radio are teaming up to bring two champions of a good ol’ tale together in Radio with Pictures – a Sunday night blind date with radios and comics. Part radio show, part comic strip and a whole lot of live performance, FBi has teamed up with writers, radio producers, comic and graphic artists to create a storytelling hour like no other.

Featuring a ragtag gang of Australia’s most hilarious and irreverent storytellers alongside the crème de la crème of our greatest illustrators, the team will create works to the theme of ‘Filling in the Blanks’, transforming the day-to-day into the extraordinary. Presenters include comedian Lawrence Leung (of ABC’s Choose Your Own Adventure and Lawrence Leung’s Unbelieveable), author Courtney Collins (The Burial), and playwright Anna Barnes plus a new work by John Birmingham (He Died With A Felafel In His Hand, Leviathan) will be presented live on stage. These writers are collaborating with illustrators Sara Drake (US), Leigh Rigozzi, Matt Taylor, Matt Huynh and more. You’ll also hear from the next generation of Australian radio storytellers, with contributors from FBi Radio’s All the Best and audio journal Paper Radio, with all stories told through both sight and sound.

ANNA BARNES
Anna Barnes is a Melbourne based writer and playwright. Her first book, Girl! The Ultimate Guide To Being You was published by Penguin in July 2012. Her plays and monologues have been performed around Australia and the UK and she was the Redstitch Actors Theatre’s writer-in-residence in 2011. She has won a number of awards for her writing including British Council’s Realise Your Dream award (2007) and the Patrick Alexander Award for excellence in performance writing (2006).

LUCIE BELL
Lucie Bell likes black tea, poppies, languages and the wireless. She’s currently studying all things radio at AFTRS and works part-time at the ABC. You can hear her work on community stations 2SER & FBi.

JOHN BIRMINGHAM
John Birmingham has written many books, including He Died With a Felafel in His Hand and Leviathan, the unauthorised biography of Sydney. He still writes widely for newspapers and magazines, blogs daily, and publishes books here, in the US and Europe.

JESSE COX
Jesse is one of the Co-Creators and Executive Producers of FBi’s All the Best. Until recently he oversaw the shows content as Features Executive Producer and has created a range of radio, including for RN’s 360documentaries, Sydney Writers Festival, In the Dark and FBi. As a sculptor Jesse has exhibited as part of Sculpture by the Sea Bondi, Art &About and recenly at the Regional Arts Conference of Australia.

PETER DOYLE
Peter Doyle is the author of City of Shadows: Sydney Police photographs, 1912-1948, which, like its follow-up Crooks Like Us, was based on extensive research into the forensic photography archive at the Justice & Police Museum, Sydney. Peter is also the author of the Ned Kelly Award-winning “Billy Glasheen” crime novels, The Devil’s Jump, Get Rich Quick and Amaze Your Friends. He currently lectures in Media at Macquarie University. In 2010 he received a Ned Kelly Lifetime Achievement Award.

SARA DRAKE
Sara Drake is a cartoonist, writer and maze maker who currently resides on the internet. Her work is displayed in official and not so official places. She likes short walks on the beach, candlelit geodesic domes, and hates jerks.

MATT HUYNH
Matt Huynh is a Sydney born, New York based illustrator and comic creator. Creative Sydney Festival named him one of the most innovative contributors to Sydney’s culture for his graphic novel CAB, documenting true stories from his childhood suburban migrant community, Cabramatta. In 2009, Matt worked with leading illustrators and publishers worldwide under theDesign NSW Travelling Scholarship. From 2010-2011, Matt undertook a yearlong commitment to create new exhibitions with every season, culminating in the exhibition of a nine meter charcoal scroll and paintings in the Australian Museum. Matt documented a Chinatown martial arts troupe in a reportorial comic launched at the Sydney Opera House for the 2011 Graphic Festival. His work has appeared in the New York Times, Rolling Stone and Bloomberg Business Week. More of his work can be found at http://www.matthuynh.com

LAWRENCE LEUNG
Lawrence is a multi-award winning comedian, documentary maker and television writer. He created two TV comedies for ABC1 Unbelievable (2011) and the AFI-nominated Lawrence Leung’s Choose Your Own Adventure (2009). He has toured his solo shows around Australia and overseas including the Melbourne International Comedy Festival, the Edinburgh Fringe and recently a two week season at London’s Soho Theatre with his latest show Beginning Middle End.

BIDDY MARONEY
Biddy Maroney is an illustrator, designer and one half of Webuyyourkids. WBYK began making screen-printed gig-posters for fun and have now illustrated and designed for a slew of clients including Adidas, Schweppes, The New York Times, Pitchfork, The Laneway Festival and Mondo / The Alamo Drafthouse. Occasionally they put on an exhibition. It’s usually about witches.

LEIGH RIGOZZI
Leigh Rigozzi is a Sydney-based artist who works in illustration, print and design. He studied his masters at Sydney College of the Arts and has gone on to self-publish various books and zines, and to exhibit his drawings and paintings in Sydney and elsewhere. He is represented by Ray Hughes gallery, and is one of the co-founders of the Blood and Thunder publishing concern. His most recent publication is ‘Pubs of the Inner West’.

MATT TAYLOR
“I grew up in Sydney, drawing a lot and reading Batman and Tank Girl comics. After school I studied a BA in Graphic Investigation at the Canberra School of Art. Here I self published comics with some fine folks (most notably 3 issues of “Ink” with Darren Price and Biddy Maroney), travelled a fair bit and relished the rock’n’roll art school lifestyle. After moving back to Sydney I published some short stories in several anthologies but in 2000 co-founded animation & design company, Sixty40 (www.sixty40.com).
Sixty40 was founded on the philosophy of producing 60% commercial work to fund 40% independent projects. As part of my “40” I have exhibited in galleries and created animation installations but most recently was accepted into a 3 week Graphic Novel Workshop at The Atlantic Centre for the Arts in Florida. Here I worked alongside 24 other comic book artists from around the world and master artists Paul Pope, Craig Thompson and Svetlana Chmakova.
My current projects are the mini comic epic “Lars the Last Viking” and a long term project of writing the great Australian zombie love story “Too Dumb to Live, Too Cute to Die.”