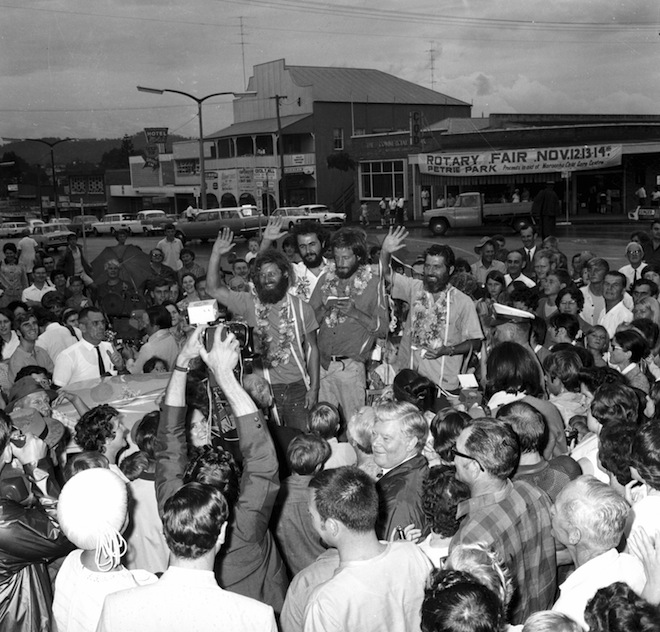 The story behind the Sea Hitchhiker, featured in #1221 Coast to Coast.
By Zacha Rosen

Gabriel Salas’ expeditions are a pretty involved subject. Here is some extra background and links to read if his expedition catches your fancy:

Gabriel was involved in two expeditions. The first was La Balsa (‘the raft’) in 1970. This first sail went from Guayaquil to Mooloolaba in one raft, with four crew. Its sail was designed specifically for the voyage by Salvador Dali. The second expedition was Las Balsas (‘the rafts’) in 1973. It went from Guayaquil to Ballina. There were three rafts, with four people per raft, for a total of twelve crew.

Explorer Thor Heyerdahl had previously lead a famous 1947 raft expedition called The Kon-Tiki Expedition across the pacific. The idea was to show that Polynesia could have been peopled by rafts from South America. Gabriel’s expedition was trying to prove something similar. In Oslo, there’s a swish museum with Heyerdahl’s reconstructed raft, Kon-Tiki.

A raft from the second, Las Balsas expedition — the raft Gabriel captained, named Aztlan — is on display at a museum staffed by dedicated volunteers in Ballina, the Ballina Naval and Maritime Museum. Gabriel said during the interview that he wishes that this museum was as well-funded as its Oslo counterpart. You can help preserve Aztlan by retelling the story of the expedition, visiting the museum or being a generous millionaire with money to burn.

A replica of the raft from the first expedition can also be seen at the Cantabrian Maritime Museum in Santander, Spain. There are a pair of photos by Joaquín Camacho on Flickr. Vital wrote a book about the first expedition called La Balsa. There are some copies available to borrow in council and uni libraries around Sydney. (It doesn’t cover a lot of the incidents in this account of Gabriel’s version of the story, but there’s a bookful of other adventures.)

You can read an article on each of the arrivals on the National Library’s Trove site. Both the 1970 article, and the 1973 one, are from the Australian Women’s Weekly. (As you can see from the articles, the magazine had a pretty different vibe in the 70s.)

Aztlan and the Amazing trans-Pacific Sail