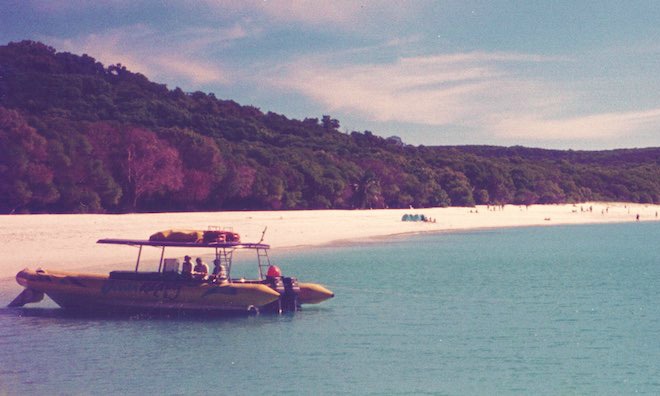 The weather is warm, the sky is blue, and you have to go back to work.

Look, we agree, it sucks. This week we’ll try and drag the holiday out a bit longer, and take you on an island holiday. Three, in fact.

We’ll take you south to South-Western Victoria, to a tall, flat island with a pretty scary story behind it. We’ll head up north, to the bottom of the Great Barrier Reef, and climb up into a haunted lighthouse. We’ll take you to an island right in the heart of Melbourne…although it’s probably not the sort of island you’re imagining relaxing on.

This week on All the Best, – islands. Their stories, their histories, and their ghosts.

As kids, Michael and his brother used to look out to the horizon off the coast of South-Western Victoria and on a clear day they could see it. A tall, flat island that we were told had a pretty scary story behind it. Here, he talks to Joel Wright about Deen Maar.

There’s an island at the southern end of the Great Barrier Reef, 45 hectares of land surrounded by the sea. Lady Elliot Island is an idyllic resort location, but not all of the residents sleep peacefully. In 1907, Susannah Mckee, the wife of the lighthouse keeper was found dead by her husband, and even now some of the resort’s employees claim that Susannah still haunts the grounds where she once lived. But why would Susannah be unable to rest? Rose Lane set out to investigate.

The great hidden sea of the unconscious by The Caretaker

Out to Sea by Olafur Arnalds

Ghost of Me by Shaula

Picture an Island. What do you see? It’s probably by itself, away from civilization, untouched by man. it has waves gently lapping at the shore with palm trees bordering a thick jungle. This story is not about that island.

Nostalgia of an Ex-Gangsta-Rapper by Deef