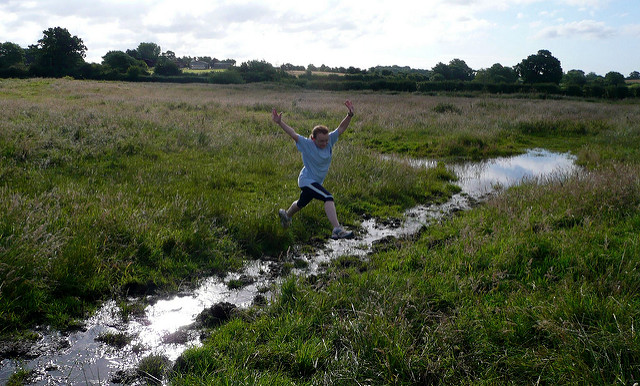 “If a group of strangers in the street asked you to jump on a mysterious box, would you take the leap?”

This week we meet three people who took a leap into the unknown, not sure where they would land. Griffin Blumer confronts a suspicious cardboard box in the small, spooky town of Tumut. Bethany Atkinson-Quinton brings us Pat Furze, a Melbourne man 5 years into a pen pal friendship with Meagan, a Texan inmate in a maximum security prison. We also meet Julio, a Mexican semi-pro soccer player, chasing his dreams in Australia.

‘What’s in the box?’ By Selena Shannon

If a group of strangers in the street asked you to jump on a mysterious box, would you take the leap?

Griffin Blumer is an actor, and in 2013 he toured Australia with the Bell Shakespeare company performing plays in schools around the country. But one day, when he was out for a jog in a town near the snowy mountains, he came across a mysterious cardboard box, lying in the middle of the road.

Music: ‘Jamaica’ by Richard in your Mind

You take a leap with every stranger you meet. You never know how things will turn out. All The Best senior producer Bethany Atkinson-Quinton brings us the story of a man who took a larger leap with a stranger than most of us ever will.

Made with thanks to Paddy Bridges.

‘Discover your potential, develop your skills’ By Tim Siow

Meet Julio, a young man taking a leap to chase a love across the ocean. The love just happens to be soccer.