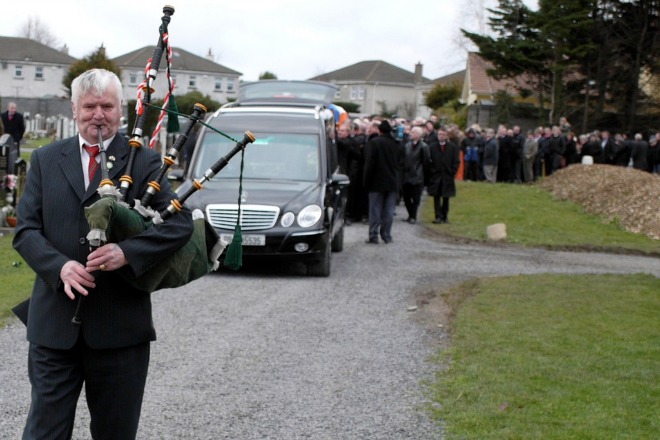 Most of us will grieve for someone or something at some point in our lives, but it’s strange and hard to talk about. Feelings of grief are hard to think about, let alone say out loud.
This week on All the Best, you’ll be hearing part one of our exploration of grief. We’ll be treading that fine line between tribute and sentimentality, between feelings and what we’re expected to feel.
We’ll be thinking about death in all the wrong ways – because no one has figured out the right way yet.
Bagpipes
“They’ve got a very unique sound and some say you either love them all you hate them but people tell me when I’m playing them particularly at funerals.”
Donald Blair is pip major of the Warnabool Pipe Band, a retired dairy farmer, and played bagpipes at Michael’s grandad’s funeral.
What is it about some things – sounds, smells, music, that just brings on grief?
Produced by Michael Brydon
Care
Mum had grown tired, so I tried flooding the basement. I put Mr Zorro, her axolotl, into the water with her and she seemed happy. This piece was first published by Seizure.
Written and read by Paul Dalla Rosa
Sound by Jess O’Callaghan
Music Credits: ‘Glass Piano’ by Podington Bear
My Mother Told Me
What does grief look like to a child?
Written and produced by Selina Springett
Original music by Stephen Vitiello
Music Credits: ‘Lulu’ by Stephen Vitiello
Remembering Mum
This story was first broadcast on All the Best in 2012 as part of the episode #1235 A Few Of Our Favourite Things. How to you get to know someone when they’re not around? Before social media, it was through sheer detective work – asking questions, looking at old photographs, reading anything they’ve written or left behind. In the case of her mother, Madelyne Cummings’ own search led her to discoveries she could treasure forever.