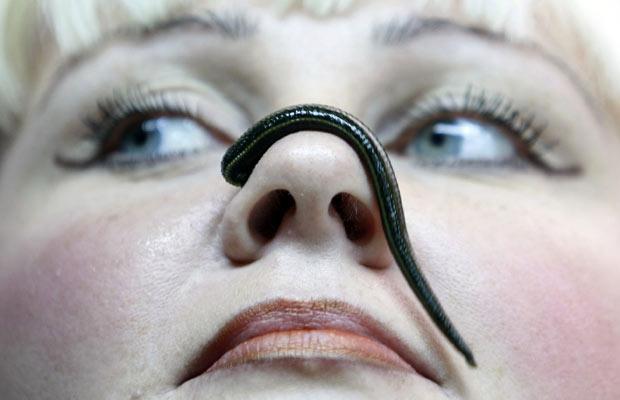 With only 5 litres of blood in our body, you’d think it would be in our best interest to keep all of that inside….you’d think.

Producer Michael Kermode travels to Woy Woy, just north of Sydney to learn more about a very natural therapy making a comeback.  Since it’s days of glory in the 18th &  19th centuries, this treatment has been used to cure various physical ailments as well as being used, in more recent times, as a beauty treatment.  If they don’t make you squeal or shriek, they might make look and feel great.  Mike Kermode speaks with Stefan Hafner to learn more about these little, medicinal creatures.

Music Credits:   Attack of the Giant Leeches – filmclip (1959), Goosebumps by Ray Davies, Tea For Two Cha-Cha by Tommy Dorsey Orchestra, Stuck On You by Lionel Richie, Pencereden Kar Geliyor by Erkan Ogŭr, Faust Symphony by Liszt, I Got Rhythm by Django Reinhardt, Let’s Work by Prince, You Make Me Feel Like Dancing by Leo Sayer, Mr Lucky by Jimmy McGriff, Stuck On You by Elvis Presley

The Mystery of the Long-finned Eel

After hearing a story about the migration of the Long-finned Eel and mistaking it for an urban myth, Merran Winchester decided she needed to find out more so she could distinguish fact from fiction.  She staked out a park at night and talked to various scientists to find out how these eels could make such an incredible journey from an inner-city park to the waters of New Caledonia.  This research led her on to ask questions about humans, machines, instinct and reason.  It is a story based on research and told by actors.